Jim Moseley Is On The Case: The Cash-Landrum Incident 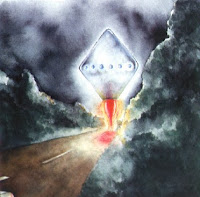 Was the Cash-Landrum UFO really a secret military project that screwed up?

December 29th, 1980. Two women and a boy are in a car traveling on a road through thick woodland, on their way to Dayton, Texas. Their journey is interrupted by a strange diamond-shaped craft floating over the road being escorted or pursued by military helicopters.

The bottom of the UFO is open, emitting light and heat. The UFO leaves with the helicopters.

Later, the three people in the car suffer health problems after the incident, apparently related to radiation exposure.

In his zine, “Saucer Smear,” Jim Moseley has been taking another look at the case. He mentioned it to me in a recent phone conversation to see if I could dig up any info online about the case like others have done for him.

Well, my investigation as such is preliminary. I took a wild chance with the search words like “atomic hot air balloon” and found a paper entitled “SMALL NUCLEAR-POWERED HOT AIR BALLOONS FOR THE EXPLORATION OF THE DEEP ATMOSPHERE OF URANUS AND NEPTUNE.”

I also searched for “atomic power aircraft” and discovered back during the Cold War about attempts to build a nuclear powered airplane. Even the evil commie Russians were working on such a craft.

I can see it now: two ato-planes collide in the air over a populated area. Time to call in the FAA and the NRC. I wonder who would have jurisdiction over the investigation.

So far no real hits related to the Cash-Landrum UFO as a secret US military FUBAR. Sorry, Jim.

I plan to write more about ato-vehicles – cars and planes -- when I have more time to follow up.

There's been a very good discussion of the case on ATS. Now I know most folk hold to the concept that ATS is no good, but there are some good members who take the subject seriously.

What should have been an average thread was elevated by a curmudgeonly SOB (Dpd11) who explained it as a night exercise involving a heli hauling a fuel bladder crashing into power lines. His idea is excellent and led to more of a thorough exploration into variations of that scenario.

In the thread, we've located one of the USAF CH-47 pilots who was allegedly involved. The general consensus leans towards Cash and Landrum arriving at the tail end of a haz-mat clear-up op.

A new member (maybe you?) has recently noted Moseley's interest in the thread.

It isn't conclusive, but I think it's the best synthesis of the case so far.

Something else to check out. Hmmm. I'm at the library now, but when I get home, maybe I'll have some time to do some digging, including the forum on Above Top Secret.

Ray, glad to see you are also on the case, I've been looking into this one for Jim and sadly, have found more bad news than good. It seems there has been some mythologizing and perhaps some unintentional bias in the investigation and reporting of the story.

The good news is that the legend has not strayed too far from the facts in the case. The core event remains unchanged. Other details such as the color and texture of the UFO, the nature and cause of the injuries, the legend of the road replacement, and the secondary "witnesses" are less consistent.

I believe the witnesses really saw something, eventually reported it in an unscientific way to investigators who were listening for a UFO story. From there it was retold emphasizing the elements that best played as a UFO vicitms' story.

Curiously, the reason this case initially received so much attention in UFO circles seems to be from the helicopters themselves, as mysterious "black helicopters" were in vogue then, especially in relation to cattle mutilations.

I'm glad Jim is featuring this case in Saucer Smear. It's is a good one to try and solve for many reasons. One of them is its fame and age. Through media coverage, a lot of people were exposed to this story as kids as their first UFO case. One of the witnesses is still alive, and some of the helicopter pilots could plausibly be as young as their mid-fifties, so there is still plenty of time for details to surface.

Kandinsky, that was me over at ATS mentioning the Saucer Smear coverage, and I also tracked down dpd11 for some further details on his analysis.

Hello Card Down/Curt, it'd be great if one of those involved surfaced and laid to rest the Cash-Landrum incident. The pilot I re-discovered has a good business and is unlikely, in my opinion, to want the potentially negative attention that could arise from public comment.

If the explanation is anywhere near to what has been suggested, there could be repercussions along the lines of a lawsuit.

Perhaps more influential in the continuing silence is the concept of 'breaking rank.' The number of personnel involved could surpass three figures and it's hard to see an incentive for any of them to shed light on the incident.

ThanX for your comments. As Curt mentioned, he was the one who posted in that ATS thread. Me, my head is bursting with information overload. ATS is on my list to check out but my list is a long one. Feedback from readers like you make it easier for me to winnow down the overload.

Like you said, something else to check out. Now if I only needed one hour of sleep per day...

Jim suggested Cash-Landrum to me on the phone, maybe thinking that a second online digger might come up with something. Knowing how thorough you are, I didn't build up my hopes that I would find something different.

But I did find mention of atomic powered airplanes. That reminded me reading a list of "new words" in an old encyclopedia that was published just after WW II, words like ato-car, ato-plane, etc. Oddly enough, no hits via Google with those words.

the truth is there were more witnesses that night. especially on alternate 90, the highway adjacent to the area where the cash and landrums were.the craft was the size of a water tower, i did not see any helos following as the craft was flying good and very quite. i got out of my car on alt.90 and walked into a the plowed field and it was a cold clear night. i wached this beautifully colored craft with many diff. colors in the belt area of the craft as they rotated. the craft stopped in mid flight and wobbly continued over the highway. i experienced the oz factor or lost time. got back in my car totalyy stunned. i drove to the nearest covenient store about 4miles away and bought a beer. i kept my mouth dhut for many yrs. till 1989 because i was in the military at the time. i told my wife and called walt andrus in 1989, he said he didnt know what it was. i called him after seeing the 1989 unsoved mysteries. p to that point i thought i was nuts but i knew what i saw. 1980 road traveler.