"If man is to survive, he will have learned to take a delight in the essential differences between men and between cultures. He will learn that differences in ideas and attitudes are a delight, part of life's exciting variety, not something to fear." - Gene Roddenberry


Back in the 1960s a producer had to push to have any diversity in a TV program.  In creating the original Star Trek TV series Gene Roddenberry wanted to show a crew of many different cultures working in harmony.

For some the concept of multinationalism was impossible to accept.  But Roddenberry persisted: his starship team included characters like Communications Officer Uhura who was of African descent.  She was an important crew member, not someone cast in a lowly support role.

One way this tolerance of other cultures was expressed was through the IDIC concept: Infinite Diversity in Infinite Combinations.  One shouldn't automatically fear "the other."

All of this was brought to mind the other night when I happened to drop in to listen to the Liberty Net, a gathering of ultra-conservative ham radio operators who not only express their views on shortwave radio but simulcast their discussions online at www.3950.net .  After recently writing a long-delayed post about their previous exploits I thought it was to check in again.

Some of the LibNetters are into science fiction and even Star Trek has been mentioned in passing.  But this time the talk was really bizarre: mankind developing teleportation as seen on ST was linked with the growing threat to the endangered white man.

Experiments have been conducted that indicate that teleportation might someday be a form of transportation.  Some LibNetters really got into the discussion about how important this would be for man's advancement in the universe.

But it was also mentioned that other races are outbreeding the white man, causing a severe deterioration of civilization.  In particular people of African descent were undermining all the great work of the Supreme White Man.  Civilization might collapse by a global dumbing-down before it could achieve teleportation and other wondrous breakthroughs.

Meanwhile at the grave of Gene Roddenberry twirling and hurling sounds could be heard.

-- You can comment below or email me at ray.x.comment@gmail.com .  Email comments might be published at a later date.

Taking A Stand Against Stan 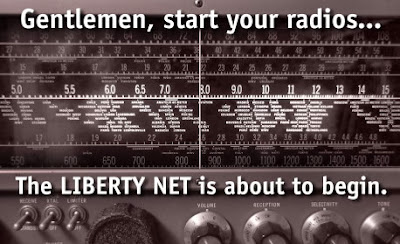 Obviously I haven't been writing/blogging that often so maybe I should get caught up on a few items.

I haven't been devoting/wasting as much time as before listening to the Liberty Net (www.3950.net).  Part of the reason is that it's the same old same old with them, ultra-right-wing ham radio operators flogging the same dead pale horse.

One item of note is how the LibNetters describe the unjustified willingness by liberals to overlook any flaws or hypocrisy with President Barack Obama.  They described the condition as "negrophilia."  Huh?  Is that in the DMS (The Diagnostic and Statistical Manual of Mental Disorders)?

And then there's an incident from some time ago when a regular participant, Stan, was really wound up, talking on and on.  Instead of politely interrupting and telling him to wrap it up, the other LibNetters moved to a different frequency, leaving the loquacious commenter all alone.

Later Stan would realize he was talking to the empty ether and so he would find the net on the new frequency.  He apologized for being so longwinded but when it was his turn he went on for a while and the others went to a different frequency.  After the third time this happened Stan apparently got the hint.

Instead of being separated by many miles in different locations, I wonder how long the LibNetters would last if they all ended up stranded in the same spot like a small desert island.  With no radios, of course.


-- You can comment below or email me at ray.x.comment@gmail.com .  Email comments might be published at a later date.


There was some excitement over dere in Cardiff, NY back in October of 1869.  During a well diggin' on Stub Newell's spread the boys found a giant petrified man in the ground!  Even some of those science folks said so, so dere.
Or so the story went.  Actually it was a hoax, the carved statue placed into the ground a year before to make its discovery appear more authentic, the giant and the soil settling into place.

A great overview to the hoax is provided by the non-fiction book, The Giant and How He Humbugged America by Jim Murphy (Scholastic Press).  Don't be turned off that this book is classified as "juvenile literature" for readers ten years and older: adults will also find it a ripping good read.  Sometimes non-fiction books for young readers can be just as informative but better because the writer uses an economy of words.  Murphy's book also provides extensive source notes with leads to other works that delve further into the details. 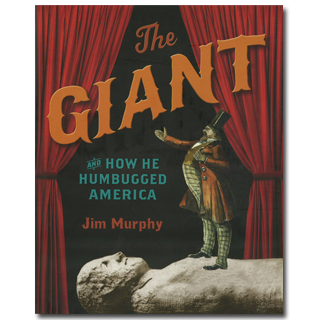 One aspect I enjoy about this hoax is how even some "experts" were fooled.  Murphy explains that some scientists believed the Cardiff Giant was man-made but not of recent origin.

When the American Goliath was first discovered an expert climbed into the muddy excavation and conducted a close examination, even smelling and licking the stone man's visage while a crowd watched.  The expert claimed it was probably sculpted back in the 17th Century by French Jesuit missionaries.

And there were those who took stock in it in being an actual petrified man, a fossilized giant.  One explanation for the change from flesh to stone was offered by a local doctor: a combo of cold underground water and "wet alluvial oil" produced the transmutation before rot could damage the body.

Murphy does put the situation of the experts in perspective when he states that back in those days university degrees in areas such as archeology and paleontology were recent developments.  Only a few who claimed to be specialists, he notes, possessed the extensive knowledge in the subjects they studied.

So with the growth of knowledge and the great number of university graduates now out in the world a hoax like the Cardiff Giant wouldn't happen in modern times.

Well, there was that incident back in 1999, as Murphy details, after a team of experts at the National Geographic Society claimed the missing link between dinosaurs and birds had been found with the Archaeoraptor liaoningensis fossil.  An article in National Geographic magazine featured the chicken-size dinosaur and how a paradigm shift had occurred.

Actually, the only shifting that occurred was a Chinese farmer glued together two different fossils together to scam some money off visiting fossil hunters.


-- You can comment below or email me at ray.x.comment@gmail.com .  Email comments might be published at a later date.


I know from experience that having word verification/CAPTCHA turned off for comments here at Blogger means the spammers start showing up.

At the same time it can be a pain when you have to squint your eyes and brain to make out distorted letters and numbers that you have to correctly type in to get your comment accepted.

So besides leaving your observations here at the blog, you can now use my dedicated email address for comments:

I appreciate feedback and maybe this will help to increase the number of comments.