A Ufoologist And His Money Soon Parted


In the field of ufology there is a body of non-evidence regarding alien visitors to this world.  Actually it’s more appropriate to refer to bodies of non-evidence.


Believers in ET visitors are so desperate for proof that they will believe in any alleged alien corpse that seemingly fell out of a flying saucer’s garbage chute.  And when such proof turns out to be bunk they say that the claim of a hoax is a hoax.  (Does that mean that a claim that a hoax is a hoax is itself another hoax?)


The late great editor/writer Jim Moseley, perpetrator of the zine Saucer Smear, referred to the extreme believers as ufoologists.


When researching tales of dead alien bodies the name Jaime Maussan pops up.  Maussan is a Mexican investigative journalist who critics say is too obsessed with UFOs and aliens.  Others call him a serial fraudster.  Along the way he’s repeatedly become involved in sensational media hoo-ha over the latest ET smoking gun.
In the spring of 2013 someone came across a strange old Kodachrome slide.  He was amazed when the image was projected to see what appeared to be a dead alien inside a glass case.  Maybe this was one of the space aliens purportedly seen in the area of Roswell, New Mexico after a saucer purportedly crashed there in 1947.
Kodak experts could find no signs of trickery with the slide.  They also said it was produced some time between 1945 and 1950, meaning it could have been used to photograph a Roswell crash corpse.
Enter Jaime Maussan, the P.T. Barnum of ufoology.  He arranged the Be Witness event held in Mexico City to reveal to the world the Roswell slides.  Around 7,000 suckers – oops, I mean attendees – paid up to $86 a head to be part of the spectacle.
But the placard blew the whole deal. 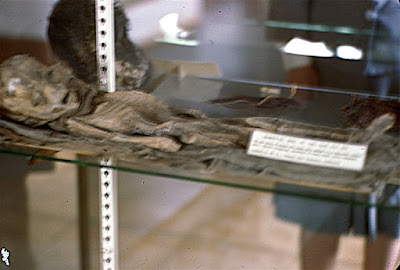 Attached to the glass case seen in the slide was what appeared to be a sign but the lettering was too indistinct to read.  Using digital technology someone was able to decipher the blurry print.  The truth was revealed: the placard stated the body was the mummified remains of a two year old boy.
Later the mummy of the Native American boy was traced to a museum in Colorado where the slide was taken.
OK, if you can’t trust photos then actual physical evidence should do the trick.  That’s the approach Jaime Mussen took – repeatedly.
Back in 2013 there was the case of the demon fairy “corpse” linked to a description in Revelations.  (It’s not the first time that ufoology overlapped the Bible and religion with aliens.)  A tiny dark brown body with wings, slender elongated arms and pointy ears was presented to the world.
Two researchers who discovered the body believed fallen angels were related to UFOS and that the demon fairy heralded the End Times.  Reportedly Maussan paid $10,000 to gain possession of the body.
The demon fairy had been stored in liquid.  But once it was exposed to the air it fell apart, revealing it was composed of glue, wood and plastic that had been held together by its skin, the work of a taxidermist.
Those taxidermists can be sneaky fellows.  Take the tale from 2007 of the Metepec creature, a small strange being found caught in a rat trap that was killed by frightened Mexican farmhands.  Maussan forked over $23,000 for ownership. 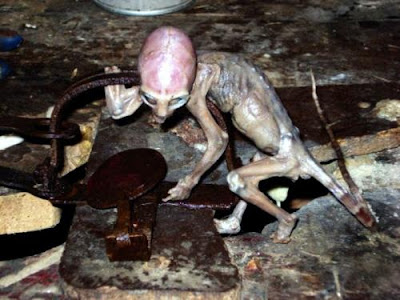 The body did indeed look extraterrestrial, suggestive of those gray aliens who wield anal probes.  But Maussan kinda overpaid for the body: a taxidermist admitted it was made from a mammalian corpse reported to be either be a squirrel monkey or a Buffy-tufted marmoset.   He skinned the animal and removed some musculature to create its eerie appearance.  The taxidermist claimed he never promoted the corpse as anything really unusual: Maussan made that assumption.
Maussan hasn’t given up, his most recent proof being the pre-Columbian “mummified aliens” from Nazca, Peru that generated a lot of buzz last year.  This time he seemed to have a winner.  Actual proof.
And also another money-maker.  After teasing online viewers with some video of the "alien mummies" the website gaia.com had anyone sucked into the story to see more behind a paywall, a subscription costing about $10 a month. 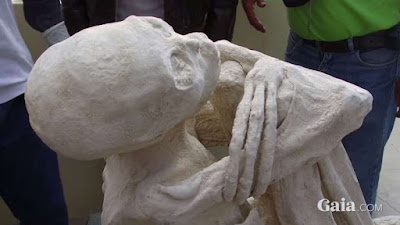 After all how can you explain a humanoid body with an elongated skull and only six fingers and toes?  To top it all off the fingers and toes are extremely long.  Gotta be an alien, right?
Not so fast.  The elongated skull could be the result of head binding when the individual was a baby, a practice that has been carried out for centuries among certain civilizations.
But what about those freaky digits, three per limb, much longer than a those of a normal human?  One explanation is trickery through mummy mutilation.
With each hand cut off the thumb and little finger.  With the feet cut off the big and little toes.  Now you cut between the remaining fingers all the way to the wrist.  You could even add extra finger bones for more length. Presto change-o!.  Freaky digits.  Perform a similar procedure with the remaining toes.
The "alien mummies" were examined, DNA testing proving they were the bodies of earthlings, not aliens.  Mummification experts issued an angry report, “The Fraud of Extraterrestrial Mummies,” that stated it was all a hoax involving the remains being altered to create alien features.
So there’s money to be made – and lost – in claims of ET corpses.  It’s all a matter of trust.
I tell people don’t go to someone else who will scam you.  Come to me.