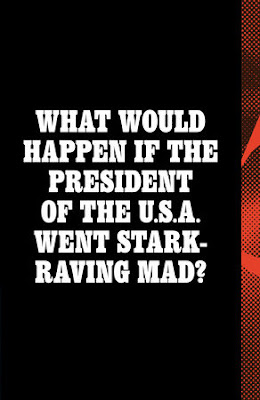 The President wants to run the country his way. He rages against anyone who challenges his plans while thinking a cabal is out to destroy him.

Meet US President Mark Hollenbach, the antagonist of Night of Camp David by Fletcher Knebel, a novel first published in 1965.

All the problems with the aberration now holding power in the White House has created renewed interest in this novel. Besides some parallels to real life it raises issues related to the current situation, i.e., how to handled the problems.

In the novel the secret committee behind Project CACTUS -- Command and Control, The Ultimate System -- is trying to reduce a nuclear launch by mistake or miscalculation "with particular attention to insulation of human aberrations."

The President has final authority to launch a nuke strike with the limitation of two National Command Authorities agreeing with his decision. But even that means nothing when he can overrule the other two men.

CACTUS is apparently a fictional device used to discuss this issue. The committee leader says that no one can prevent someone from flipping out but can isolate that individual from the big decision.

Even before the Aberration in Chief was sworn in some expressed great concern about whether he's stable enough to be in charge of the launch codes.

Night of Camp David also deals with the problem of putting succession in motion to remove a (mentally) disabled president. A group of governmental officials gather to discuss whether the President is indeed mentally unfit and whether succession should be initiated. The group argues in circles for hours with no definite consensus. Like I say a platypus is an eagle designed by a committee but these guys can't even produce a baby winged platypus.

Is President Hollenbach nuts? Let's see, he wants the FBI to monitor all phone conversations, storing the recordings in a computer system. Crazy, huh? (But since 9/11...)

Hollenbach comes up with grandiose plans like the US uniting with Scandinavia followed by other European countries joining in. If the other countries don't want to join then force -- maybe military force -- would persuade them. After the creation of a super-government Hollenbach would served as its prime minister. A bit delusional and narcissistic like some leader we all know. ( A proposal for a US-Russia union, anyone?)

While raising disturbing points Night of Camp David doesn't really follow through on them. The ending is too convenient, a cop out. If we see Checkov's gun then it should be fired. Dealing directly with President Hollanbach could have examined, how one choice turns out to be the right or wrong one. The novel just provides a red-white-and-blue happy ending.