Sometimes to get an inside view you have to fake insiderism.

That was the situation faced by the authors of When Prophecy Fails, a book documenting the activities of a flying saucer doomsday cult in the 1950s. In the Methodological Appendix the authors discuss how the secrecy surrounding the cult – it was wary of nonbelievers – required them to work undercover instead of openly.

As the authors explained: “We tried to be nondirective, sympathetic listeners, passive participants who were inquisitive and eager to learn whatever the others might want to tell us.”

But the authors and others who served as observers were still influential.

For example, to gain entrée an observer had to pretend to have experienced a supernatural event. The group was receptive to those who had such experiences. But the problem was that the observer’s story served to reinforce the cult’s beliefs.

Two of the key figures in the cult were Marion Keech and Dr. Armstrong (not their actual names). Dr. Armstrong was a college professor who held meetings about Mrs. Keech and her prophecies.

A weird dream story was concocted for one observer in the study so she could enter Dr. Armstrong’s circle. The “dream” was tailored to fit the predication of a catastrophic flood soon to occur. Since the story “proved” that there would be a devastating flood, the rest of the prophecy – flying saucers would arrive to save the chosen – had to be true. The observer was asked to repeat the story to other members and also to tape-record it so that her narrative could be sent out to believers in other locations.

That observer and three others joined the cult within ten days. As the authors note, just having four new members join a small group in relatively short time had an impact by itself, reinforcing its belief system.

Despite the attempts for “passive participation,” observers still influenced the group. One observer showed up on Christmas Day and this visit was interpreted by Mrs. Keech that he was a spaceman.

On another occasion one of the authors was commanded by Mrs. Keech to lead a meeting. The author, concerned by maintaining neutrality, said that everyone should just meditate.

That seemed to be a safe bet until one member, Bertha, fell into a trance and started channeling messages. By doing next to nothing he allowed her to take the floor. This member became a factor in the group’s power structure, offering a different viewpoint.

At least the observers tried to not to influence events. But what if they hadn’t been so concerned? Tricksters or agents provocateurs would’ve had a field day.

I know if I had been one of the observers in the study, I would’ve struggled with controlling the jokester in me.

Ergo, there are no photos of the living Jesus.

But not when it comes to supernaturalism, especially of the New Age kind.

After reading the non-fiction work When Prophecy Fails, I wanted to find out more about the people described in the book. Their names had been changed but with some Googling I discovered that the actual appellation of “Mrs. Marion Keech,” the leader of the doomsday flying saucer cult in the 1950s, was Dorothy Martin.

After her prophecies failed in Chicago, Dorothy Martin moved on but kept channeling Jesus Christ – or the being whose real name, she believed, was Sananda. She ended up in South America, living in the Yucatan, with a new name: Sister Thedra.

Jesus (AKA the Ascended Master Sananda) appeared to Thedra and cured her of terminal cancer. To prove that she hadn’t been dreaming, Jesus appeared in tangible form to an archeologist in Chichen Itza, Yucatan and allowed his presence to be recorded via photography. This image was taken by the archeologist on June 1, 1961: 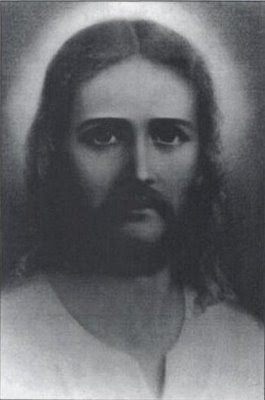 According to author Mark Amura Pinkham in his book, The Return of the Serpents of Wisdom, the archeologist gave the miraculous photo to Sister Thedra to be used in her work. She returned to the United States to keep spreading the word of Sananda-Jesus through her organization, the Association of Sananda and Sanat Kumara.

The bright morning sunlight streams through my windows. But as soon as I snap open the translucent plastic blinds, a sheet of frost obscures the outside view. It’s –10 degrees Fahrenheit (-23 Celsius) beyond the protective pane.

Another damn winter in Plattsburgh, NY. Venture outside: the life-giving sun energizes but that vampire winter sucks away all that energy, despite layers of warm clothing. Add some flowing air and the wind chill kicks in, biting any exposed skin. When you walk inside a warm shelter, the cold clings to you like Oort cloud vapor.

Nothing motivates me more than an arctic blast.

This winter has been a real struggle for me. It snowed in October and since then more storms have been rolling through, adding to the mess. Throw in cold snaps (like the one for the last couple of days) with temps plunging down to –20 F (-28 C) or more at night (before the wind chill factor) and you’ll know why I haven’t been posting that much lately.

Make like a snowbird and fly down to Florida for a break? On my budget? Sure.

Plattsburgh by itself is difficult. A Plattsburgh winter is impossible.

But I’ll try to slog on, shorter posts.